Commitment to the intestinal microbiota rewarded!

This is the goal of the Henri Boulard Public Health Award1, launched in May 2021 by the Biocodex Microbiota Foundation. This new award focuses on programs promoting good nutritional practices, wastewater treatment projects, campaigns to reduce infant mortality caused by infectious diarrhea, among others. It is aimed at projects linked to the intestinal microbiota that have the potential to significantly impact public health at a local level.

True to its humanistic values, the Biocodex Microbiota Foundation remains committed to supporting scientific research and improving our understanding of the microbiota. In addition to international grants for basic and clinical research on various aspects of the gut microbiota, in 2021 the Foundation is launching a new award to distinguish innovative public health projects linked to this ecosystem: the Henri Boulard Public Health Award.

Open to all health professionals, the awards are aimed at projects linked to the gut microbiota. Worth €10,000 each, the two awards will be granted each year. Applications can be submitted until September 30, 2021. An independent jury will evaluate the proposed projects at the end of November based on the following criteria:

An essential part of the body, the gut microbiota remains the subject of numerous research projects that aim to better understand how the trillions of microorganisms living in the gut (bacteria, viruses, parasites, and fungi) interact to make the digestive system function. We know that this microbial community is a complex ecosystem that plays a key role both in maintaining good health and in the appearance and development of certain diseases. Changes to this ecosystem are linked to many increasingly prevalent chronic diseases. Links have now been clearly shown between microbiota imbalances and conditions such as obesity, asthma, certain allergies, depression, and autism. With the Henri Boulard Public Health Award, the Biocodex Microbiota Foundation continues its mission to highlight the importance of the microbiota and remind us of its role in current public health issues.

Since 2017, the Biocodex Microbiota Foundation has been working to improve science’s understanding of the human microbiota. Each year, the Foundation contributes to the funding of global research on microbiota via grants awarded to innovative scientific research projects. Calls for projects are regularly launched on a specific theme related to the microbiota, with the most promising projects then selected by an international scientific committee made up of independent experts. 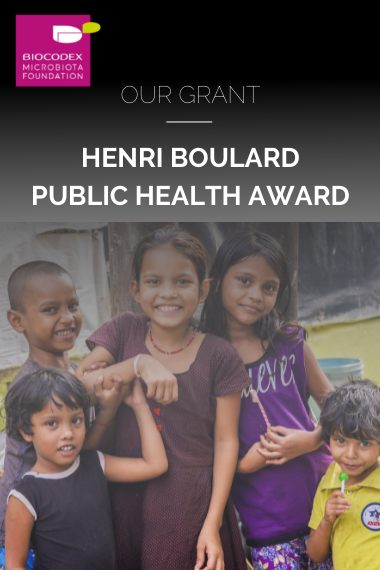 1In the early 1920s, French agricultural engineer Henri Boulard travelled to Indochina, where, while researching tropical diseases, he would discover the first probiotic yeast strain used for therapeutic purposes: Saccharomyces boulardii CNCM I 745. Patenting his discovery in 1923, he would subsequently market it under the name Ultra Levure.